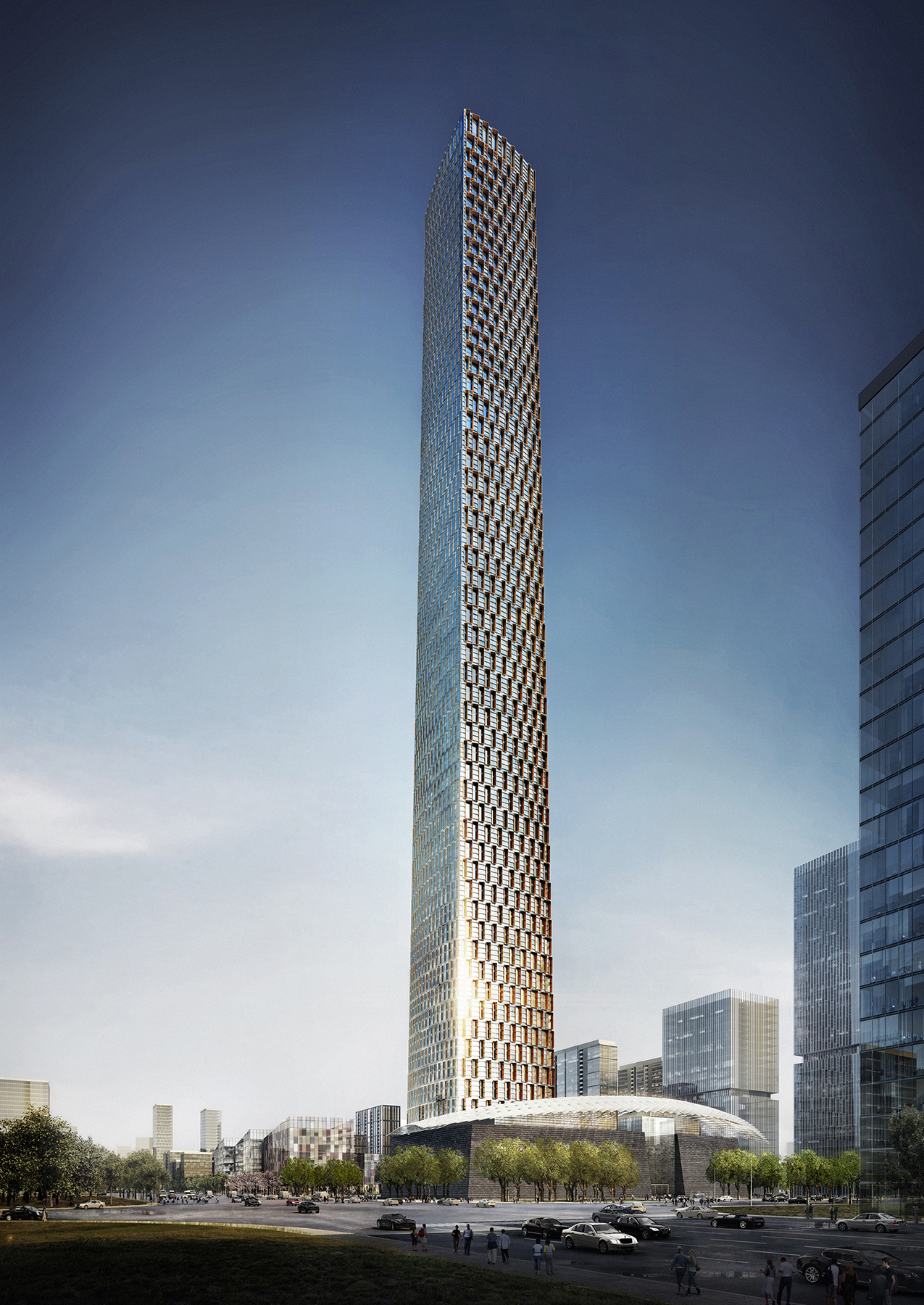 The tower is in the Fengdong New City District, directly west of the city center, and this axial relationship is an important part of the overall master plan. The tower has a direct axis with the historic bell tower at the center of the Wall City of Xian. On the east-west direction, the tower functions as the primary focal point between itself, the retail mall, and the conference center. The open space is organized as a series of passages throughout the site, connecting the buildings, reemphasizing the axial importance of the tower, and anchoring the development. Each building has its own dedicated entrance and identifiable address, with direct access to the site from all directions.

The 101 story, mixed-use tower has office space occupying the first 75 floors and hotel on the upper floors. The tower’s subtle taper and the changes to the core as the elevators drop off, allow an ideal floor plate for uses at their respective locations in the tower. The office space is divided into eight elevator zones and has two sky-lobbies that add efficiency to the core and decrease travel time for occupants. The office elevator groups range from three to six elevators each. The two sky-lobby shuttles are in groups of six, with the hotel zone using three sky-lobby shuttles to deliver occupants to Level 78 where they board four local elevators to the hotel floors. Mechanical and area of refuge floors follow local requirements and are coordinated with the various zones of office elevators and MEP floors to increase overall efficiency.

The building envelope responds to environmental conditions with passive solar controls to create ideal natural lighting levels. Instead of a traditional fully glazed curtain-wall system, a punched window expression changes in density and depth on each surface, depending on its orientation and exposure to the sun. By tuning the façade to protect each side of the building, it dramatically reduces the building’s energy consumption. Glazed terracotta tiles frame the windows and sunshades, giving further protection to the glass from the direct sun.

Shading elements on the exterior façade increase self-shading, reducing the incident annual solar radiation by 25%. With the building’s window-to-wall ratio at an average of 60%, shading elements are designed to be the deepest on the east and west façades, maximizing protection and self-shading. Conversely, those on the north façade are shallower to maximize diffused daylight. The largest solid panel on this version is 1.5 meters wide.