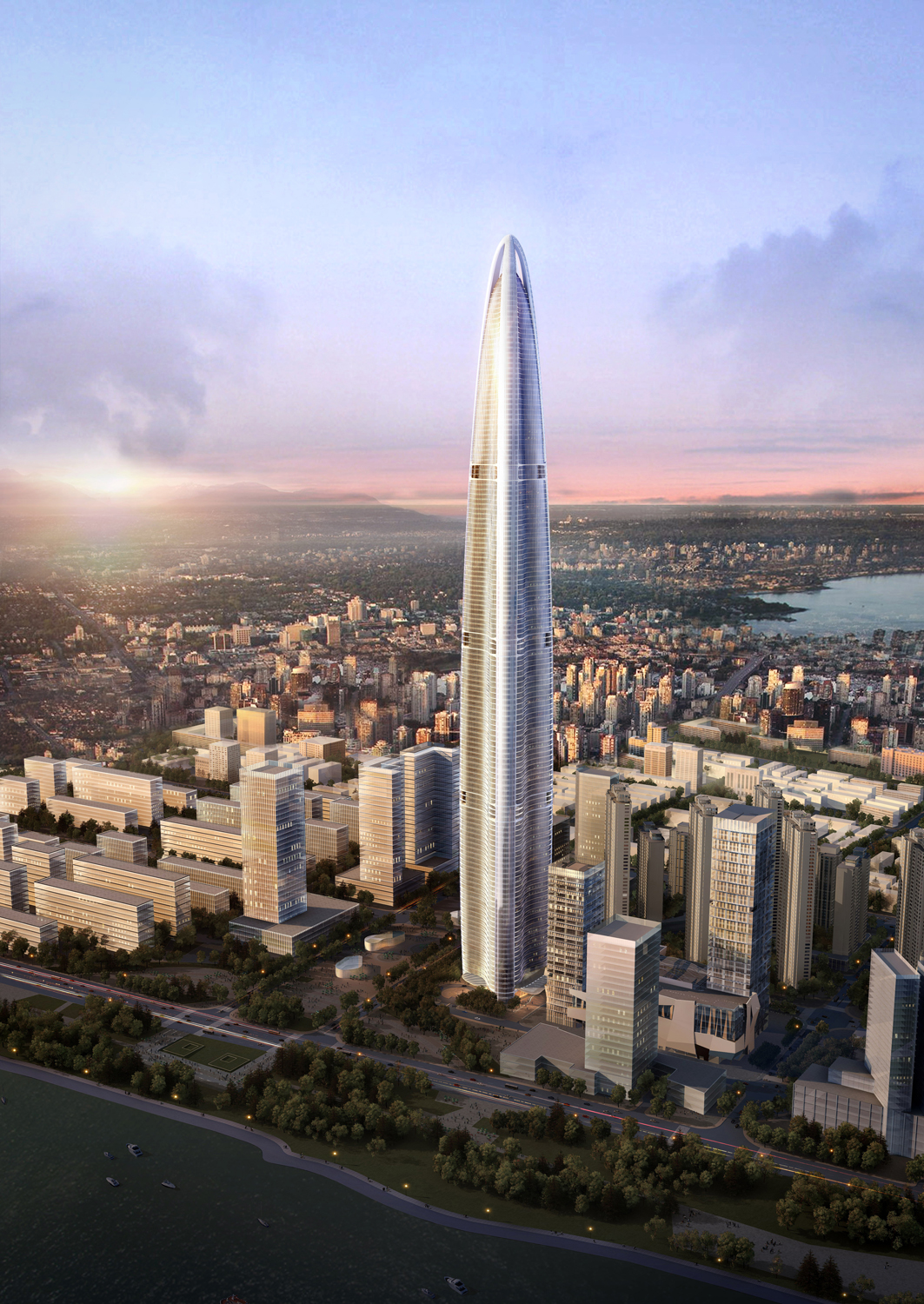 The tower’s three corners rise from its tripod-shaped base and taper upward, culminating in an arched tip above the dome at the top. This efficient aerodynamic shaping allows it to minimize the amount of structural material–and the associated embodied carbon–needed for construction. The corners are smooth curved glass, contrasting markedly with the tower body’s textured curtain wall cladding.

The curtain wall encloses a composite concrete core with steel framing. Apertures in the curtain wall at regular intervals assist in venting wind pressure against the tower; these apertures also house window-washing systems, as well as air intake and exhaust systems on the mechanical floors.

Other planned sustainable elements of the project include:

-Energy recovery using an enthalpy wheel integrated into the ventilation system; this captures energy from the building’s exhaust systems and uses it to pre-heat or pre-cool air entering the building.

-A greywater recovery system, which takes wastewater from the hotel laundry, sinks and showers and reuses it in the building’s evaporative cooling system.

-A high-efficiency lighting system, which uses low-energy-consuming ballasts and lamps to reduce required power consumption. A daylight-responsive control system, which automatically turns off electric lights when  sufficient daylight is available.

-Water-conserving low-flow plumbing fixtures, which reduce the total amount of potable water required as well as the associated pumping energy.

In addition, the AS+GG Interiors studio is developing the tower’s fluidly sculpted interior public spaces, many of which reflect the tower’s exterior silhouette. The conical silhouette is visibly echoed in the entrances to the primary elevator bank from the main lobby, as well as in the shapes of the elevator cabs and other public spaces. The lobbies and other amenity spaces within the tower also feature sweeping, fluid lines and a neutral blue-gray palette that recalls the reflective glass of the exterior wall. The transparency of the ground-floor lobby wall allows views from inside toward the entry canopy drop-off areas, establishing a seamless relationship between the interior and exterior.

After construction had already commenced, the tower's height was modified under the direction of the President Xi of China and was reduced from the originally designed 636 meters tall to 475 meters tall.

21 feb 17  | Curbed
10 tallest buildings under construction or in development around the world
In the race to build vertically, China has a commanding lead... MORE

6 apr 16 | World Architecture News
Wuhan’s supertall tower heads for the top
Construction on the Wuhan Greenland Center is well underway and when completed it will be the third tallest building in the world... MORE

sep 11  | Perspective
High up in the wind
Situated close to the meeting of hte Yangtze and Han rivers, Wuhan Greenland Centre is scheduled to be completed in about five years... MORE

aug 11  | The Big Project
The Big Players
They are the companies and projects rebuilding the region's construction industry; from world-class stadia, to record breaking architecture and infrastructure built for the next generation. The Big Project speaks exclusively to the industry's big players... MORE

21 jun 11  | The Chicago Tribune
Smith and Gill win competition for supertall tower in China
Chicago-based architect Adrian Smith and Gordon Gill have won a competition to design a Chinese skyscraper that will, according to the firm, be the world's fourth tallest building... MORE

21 jun 11  | e-architect
Wuhan Greenland Center Tower
Adrian Smith + Gordon Gill Architecture is pleased to announce that it has won an international competition to design Wuhan Greenland Center, which at 606 meters (1,988 feet) will likely be China’s third-tallest building, and the fourth tallest in the world, when completed in about five years... MORE