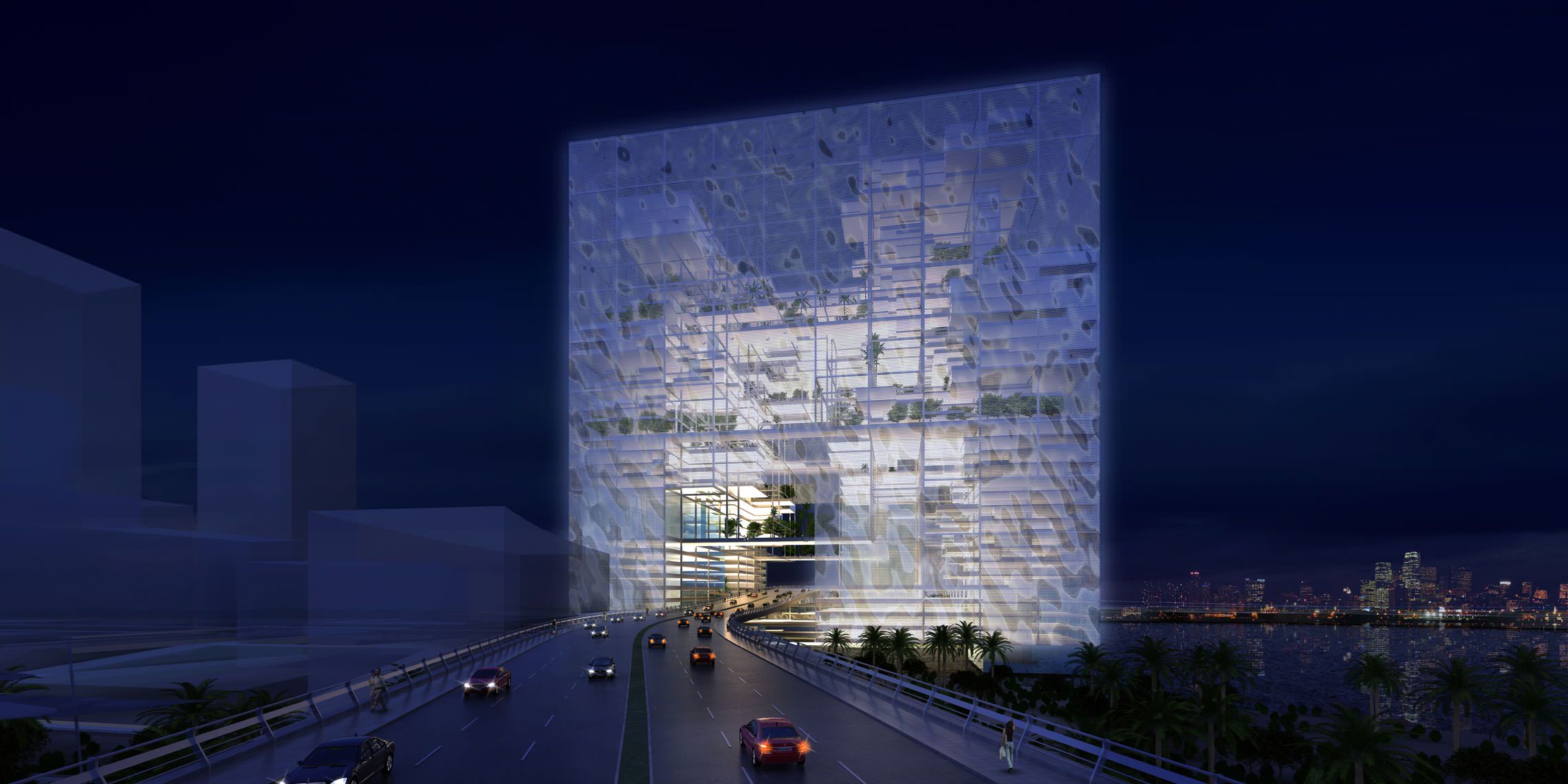 Designed as both an urban gateway and a self-sustaining city all its own, Matrix Gateway Complex is a 42-story prototype that if built, would be one of the greenest, most aesthetically striking and technologically innovative mixed-use buildings in the world.

A 180-meter cube designed on an 18-meter supergrid, the prototype contains many of the components of a great urban center: a hotel with fitness and conference centers, retail and office spaces, cultural and religious facilities, and waterfalls and lush green terraces. Each component would take the form of a moveable module connected to one of five central cores, all visible from the outside through a semi-transparent exterior skin encrusted with a blend of screens and photovoltaic cells. The total floor area would be about three million square feet, with an additional one million square feet of external park.

The prototype, designed to rest on a cove, harbor or lake, also features a bridge over the water through a 54 square-meter aperture in the building itself. Drivers would pass over the bridge from one land mass to another through the building, emerging from it in either direction to spectacular views of the city skyline.

Besides its high-tech skin, which both blocks solar heat gain and generates power from sunlight, the building’s sustainability features include a condensate collection system that converts humidity from the air into drinking water. The water outside will naturally cool the environment around the structure, while waterfalls and breezes flowing through the screens will make the interior feel cooler.

The prototype’s structural concept is elegant and simple. Floor systems are composite steel framing hung from the cores (four of concrete, one of steel) and supported by a hat truss roof system. The truss also engages the concrete cores to act in unison when subjected to lateral wind loads. Hanging steel column supports are provided for most floors on an 18 sm grid. Floor framing spans between column gridlines, allowing large, 18 sm free spans.

spring/summer 11  | One
(Re)Conceiving Cities
Whether building a city from scratch in Abu Dhabi or retrofitting the Chicago Loop, architect Adrian Smith says 21st-century cities need to be clean, grean, and user-friendly... MORE

20 jan 10 | Architect Magazine
2010 P/A Awards Matrix Gateway Complex
What if an entire city could be housed under one roof... MORE