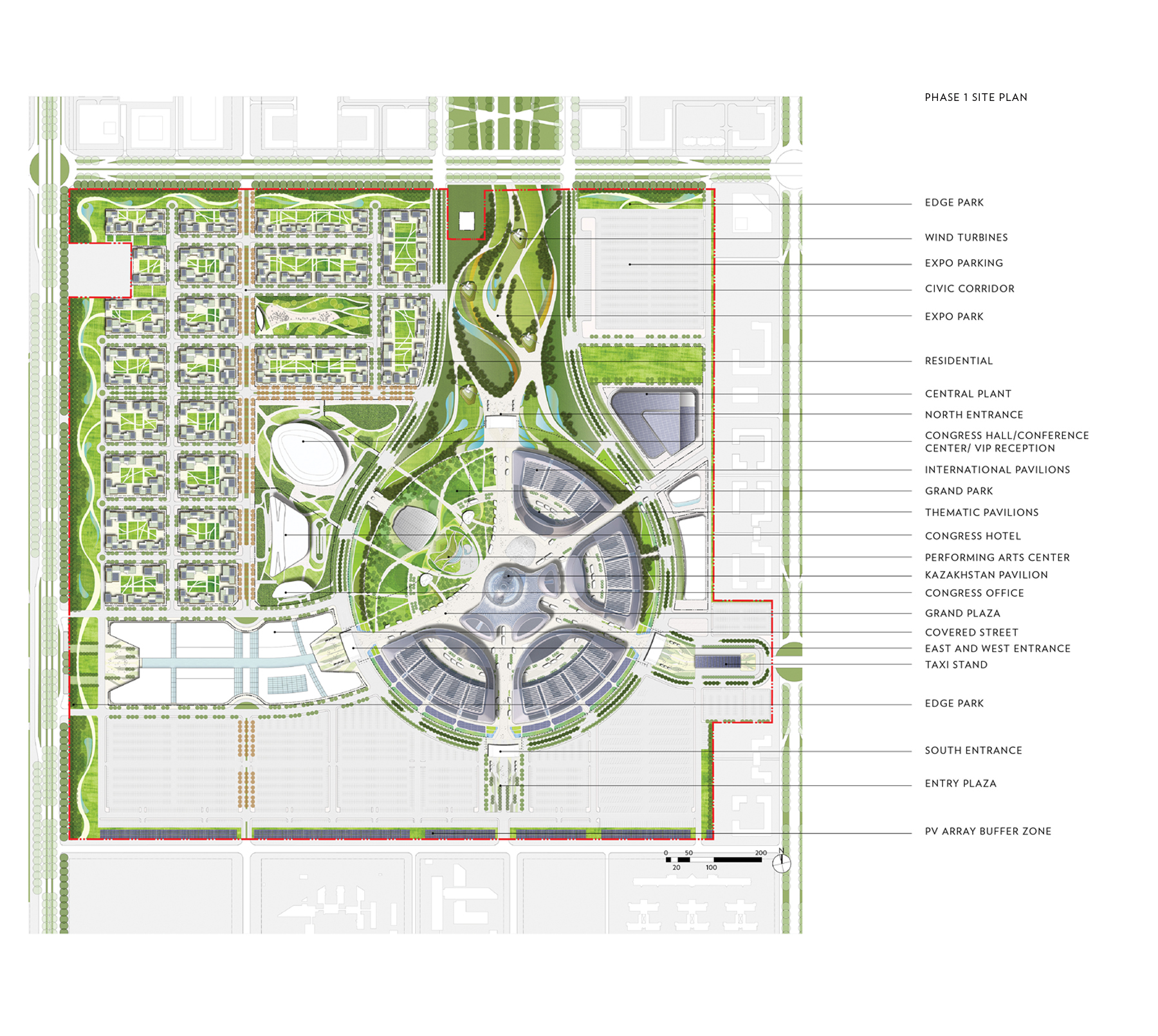 Astana Expo 2017, the International Exposition that took place from June through October 2017, has now transformed into a thriving post-expo legacy neighborhood and technology district that embraces the exposition’s theme of “Future Energy." The theme seeks to find new ways to achieve qualitative changes in the energy sector, primarily for the development of smart efficient buildings with alternative sources of energy and transportation. The solution ensures economic growth and improves social standards, while reducing the burden on the environment.

Split into two phases, the 430-acre project features exhibition and cultural pavilions, a residential development, and service areas, including shopping, socio-cultural, educational, and civic facilities, parks, and parking. Phase I includes the design and construction of the exposition buildings, including the central Kazakhstan Sphere and the Congress Center, as well hotel, residential, retail, and performance spaces. Phase II, the post-expo legacy development is now being implemented as Astana International Financial Centre (AIFC). The expo buildings have been adapted into an office and research park that has attracted international companies and entrepreneurs from 35 countries. Expo parking and service zones are repurposed into thriving and integrated neighborhoods.

The major design concern was to reduce the overall energy demand of the site by using passive and active strategies. The design team executed a series of parametric modeling studies with the goal of minimizing the site’s energy-use while maximizing the energy-harvesting potential and user-comfort levels. The results dictated the most efficient orientation of the site and each individual building to optimize the strategies that would reduce the overall energy usage of the Expo community.

All opportunities for power generation were investigated and several were incorporated into the building-design guidelines, including high-performance glazing that maximizes solar heat gain in winter while providing shading in summer; energy piles that will reduce energy demand and provide temperature modulation during winter; energy storage capacity that can meet two days of emergency demand; and 90% of waste generated on site diverted from a landfill.

When completed, the legacy development will be one of the most sustainably built in the world. The design calls for 100% of the post-Expo non-potable water demand to be provided by the on-site water reclamation facility and 24% of the post-Expo electrical demand to be met from on-site BIPV energy systems. As designed, the total post-Expo grid energy demand is 49% less than an ASHRAE 90.1 2010 Baseline, while the office buildings will use 22%-40% less energy than ASHRAE 90.1:2010 Baseline. Overall grid energy reduction is 59%.

mar 14  | Architectural Record
Big Bigger Biggest
The future looms large for seven forthcoming projects around the globe that demonstrate ambition in scale and form. Click the image below to view a slide show of massive buildings in design or already underway... MORE

28 feb 14  | Official Site of the President of the Republic of Kazakhstan
Presentation of conception of Astana EXPO-2017 architectural project
During the presentation held at Akorda by the “Adrian Smith+Gordon Gill Architecture LLP” company, the winner of the architectural competition, the President noted that the EXPO-2017 would become the largest international event to host in Astana for the first time in its history...MORE

jan 14  | Architect Magazine
Architecture and the Third Industrial Revolution
Ready for the next revolution? The profession changed dramatically thanks to mechanization and mass production, and the next massive shift will be no less disruptive. In this era of small-scale, bottom-up design, say hello to 3D-printed houses, digicities, and curriculums that teach future architects about far more than just building... DETAILS