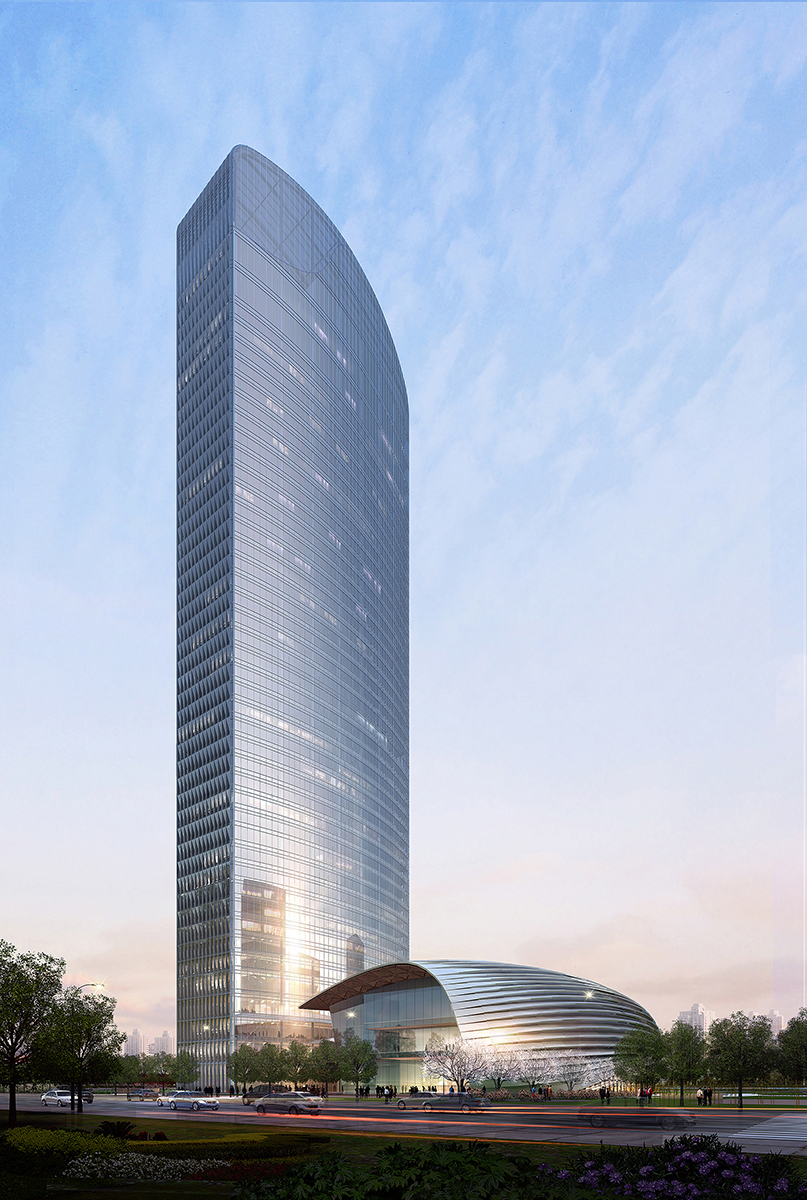 Adrian Smith + Gordon Gill Architecture is pleased to announce that it has won an international competition to design Qintai International Tower, a 248-meter (814-feet) tall, high-performance corporate headquarters tower and related podium structure in Wuhan, Hubei Province, China. AS+GG’s winning entry was selected over competing schemes from firms based in the Netherlands, Japan and Hong Kong.

Qintai International Tower’s total constructed area is 146,000 square meters, including a 5-star hotel and office space to be occupied by the client, CNTC Hubei Provincial Tobacco Corporation, and other tenants. The tower will be connected via a plaza and an above-grade pedestrian bridge to the podium, which will contain retail, restaurants and a conference center with a ballroom. At the top of the tower, a special executive lounge and restaurants will offer spectacular views of the surrounding cityscape.

The tower’s unique form is both culturally and environmentally contextual to the city of Wuhan.

“The genesis of the form in the competition phase related to the Qin, a traditional Chinese musical instrument similar to a zither, featuring strings that are stretched over pegs that form a raised S curve over a rectangular wooden frame,” notes Adrian Smith, FAIA, RIBA. “The instrument is similar to the one featured in a Chinese legend with deep significance to the culture of Hubei, which in turn inspired our design process early on.”

During the ongoing concept design phase, the cultural influence of the building has been developed in relation to the building’s energy performance. Informed by a rigorous parametric analysis, the facade now bows outward in a diagonal line that ascends northwest up the tower. This shape has been adjusted to optimize self-shading and minimize solar heat gain, an effect augmented by the fact that both the tower and podium’s narrowest exposures are mostly to the east and west, from which the sun is harshest. In addition, the tower’s smaller floor plates allow for greater use of daylight harvesting, which in turn reduces the building’s energy consumption for artificial lighting.

“Our initial reference of Qintai International Tower in relation to a musical instrument has been refined with the building’s performance in mind,” says Gordon Gill, AIA. “Now the building has matured to have its own specific language tied to a broader environment context while still maintaining the cultural reference of the Qin. In that sense, it’s an advancement of our firm’s continuing investigation into the relation of architectural form and sustainability, a concept summed up by the phrase ‘form follows performance.’”

Qintai International Tower is oriented to maximize views of Wuhan’s great bodies of water, including Moon Lake to the east and the nearby Hanshui River to the north. The building will also enjoy a perspective of the AS+GG-designed Wuhan Greenland Center, a supertall tower now in the early stages of construction about five miles from the Qintai site.

“We are delighted and honored to be working with CNTC Hubei Provincial Tobacco Corporation and doing a second project for Wuhan,” says AS+GG partner Robert Forest, AIA.  “It’s a special opportunity for AS+GG to be able to shape the built environment of a major international city in a highly sustainable manner, and we intend for Qintai International Tower to be a world-class example.”

The cultural importance of Moon Lake and the city’s two rivers are emphasized on Qintai International Tower’s 25,863-square-meter site by a series of pools and other water features that surround the tower and podium. The water features are also performative elements of the design, making the air feel fresher to building users in Wuhan’s hot climate. Water for these elements will come from storm water and/or recovered condensate from the complex.

Other sustainable features being explored for the complex by AS+GG’s sister firm, PositivEnergy Practice, include:

About Adrian Smith + Gordon Gill Architecture
Adrian Smith + Gordon Gill Architecture is dedicated to the design of high-performance architecture in a wide range of typology and scale, from low- and mid-rise residential, commercial and cultural buildings to mixed-use supertall towers and new cities. The office uses a holistic, integrated design approach that explores symbiotic relationships with the natural environment. AS+GG is currently working on projects for clients in the United Arab Emirates, Saudi Arabia, China, India, South Korea, Malaysia, Canada and the United States. The partnership was founded in 2006 by Adrian Smith, Gordon Gill and Robert Forest.

About PositivEnergy Practice
PositivEnergy Practice is a high-performance engineering and sustainable design and  consulting company that conceives, designs, implements and manages energy performance, engineering systems, resource management and carbon reduction strategies for clients around the world. It is a limited liability company formed in early 2010 to provide energy and engineering services to advance sustainable initiatives and high-performance design on a large scale.

About Halvorson and Partners
Halvorson and Partners is a leading structural engineering firm that collaborates with architects, owners, developers and private clients worldwide. With extensive experience engineering a range of structures, Halvorson specializes in the design of projects requiring a unique vision: skyscrapers, long span structures and projects on challenging sites. Contributions to each project reflect the firm’s strong commitment to service, creativity, technical excellence and efficiency.