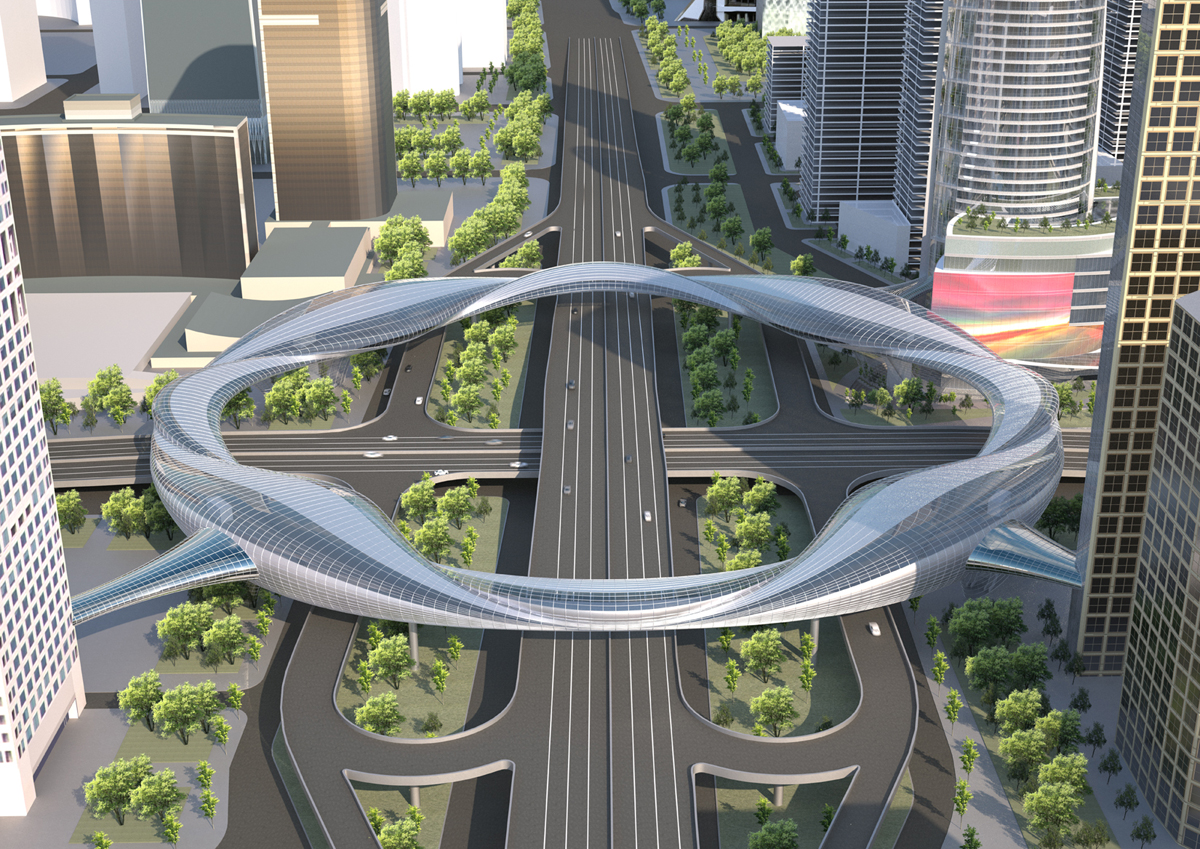 Adrian Smith + Gordon Gill Architecture’s design for the Golden Cross Sky Ring, a unique pedestrian bridge for a busy intersection in central Beijing, is a winner of the 2011 International Architecture Award, given by the European Centre for Architecture Art Design and Urban Studies and the Chicago Athenaeum: Museum of Architecture and Design.

The Golden Cross, the intersection of the East Third Ring Road and ChangAn Avenue, is the Beijing east-west central axis and the gateway to the central business district. AS+GG’s Sky Ring effectively connects buildings around the intersection above the street level, opening to the ground and connecting to the underground subway through four vertical cores to the existing subway exits. Beyond the basic circulation functions, the Sky Ring is envisioned as an urban space with relaxation gardens, retail stores and observation decks. The facade also features an operable skylight system that opens in summer to allow natural ventilation and closes in the winter to provide protection from the cold.

The Sky Ring is one of 90 winning projects selected from hundreds of entries submitted by architecture firms around the world. The winners will be showcased in a special exhibit, “New World Architecture,” at the Central Cultural Recoleta in Buenos Aires on Oct. 8-30 during the International Biennial de Arquitectura in Argentina.  The exhibit will then move to Warsaw, Poland, and other locations in Europe in 2011-12.

“This Awards Program draws important public and professional focus for the celebration and recognition of the most important key buildings produced in this decade, underscoring the highest level of imagination and inspiration of the ‘best of the best’ architectural minds practicing design today,” said Christian K. Narkiewicz-Laine, Museum President, The Chicago Athenaeum. “The selected projects challenge new approaches to design that are beyond the envelope of the everyday, while providing cities with key civic buildings that celebrate and harmonize architecture as a high art while finding answers to the complicated problems of environment, social context, improving quality of life, and sustainability.”

This year’s jury for awards took place in Warsaw, Poland under the auspices of the Association of Polish Architects.